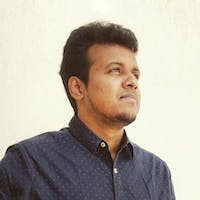 Subscribe to my newsletter and never miss my upcoming articles

Hello! We are on Day 08 of our Advent of Code journey. Today's puzzle involves a lot of jumping, let's see if we can hop around and solve it 😀.

Spoilers Ahead! The full solution to the problem below is available here.

The input is a sequence of bootcode instructions, wherein each instruction consists of an operation (acc, jmp, or nop) and an argument (a signed number like +4 or -20).

Given the above input, for Part 01 we have an instruction that causes an infinite loop, and doesn't allow the program to terminate. The solution for Part 01, is to return the value of the global accumulator right before going into an infinite loop.

Let's see how we can solve this. The algorithm would look something like:

The following snippet shows how we can parse the input into an array of instructions.

The parse function trims the input lines, and then calls the parse_instruction function which returns a tuple of (operation, argument). For example this would look like ("acc", 9).

Alright! Once we call this function with the instructions, we would break right before the infinite loop, and return the acc value.

Part 02 is an extension to Part 01, wherein we need to check if we can avoid the infinite loop, by changing either a nop instruction -> jmp or vice versa and are able to get the program to terminate.

We write a function that fixes the bootcode by iterating through our instructions and swapping jmp and nop with each other in a new copy of our instruction set, processing these new instructions again and checking if that swap resulted in a successful program termination.

The result of this function returns the answer to Part 02. That's all for today. Ciao 👋